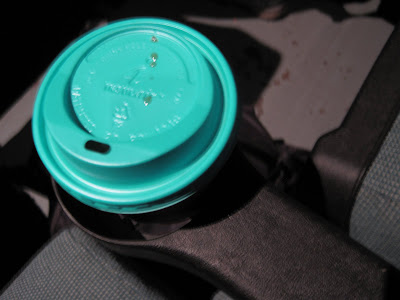 So far I have checked out two films:

1. PINOY SUNDAY which was pretty charming. The story is about best buddy, Filipino migrant workers, one great red couch and their life in Taipei. I picked this one cause I was hoping to learn something about that city, cause I'll be visiting it next month!

2. FORCE OF NATURE: THE DAVID SUZUKI MOVIE The screening was totally packed, not all that suprising, considering he is a home town hero. He was there too, answering questions, along with the film maker, after the film. May I also point out that he was wearing the SAME shirt at the screening as he was wearing a few weeks ago when we saw him speak AND in the Legacy lecture that he was giving IN THE FILM. Leading me to believe that David Suzuki only owns one shirt. Let that be a lesson to us green fashion kids.

Pictured is the coffee I drank while watching Pinoy Sunday. Note to self: just because they serve coffee at the theater, doesn't mean you should buy/drink it.
Posted by naamers at 10:31 AM